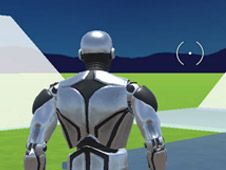 We are now excited to invite our visitors to play Just Build.lol online for free, which is a multiplayer io game in 3d which is heavily inspired by Fortnite as well as other various battle royale games, but it's not that much about the shooting and action elements as it focuses on the building aspect of this game.

Move your character using the W, A, S, D keys, and then use the other keys needed in this game to build your fort out of many pieces, as well as using various tools at your disposal. These can be number keys like 1, 2, 3, or letters such as F, Z, X, C, V.

Next to each key you can see what kind of platform you can build, so build a bigger and more powerful fort than your opponent in order to win the competition, winning by bringing theirs down.

You can play against random players on the internet, one-on-one, you have the practice mode as well, and you can invite specific friends to play against in private rooms as well. Start now, enjoy, and stick around for more fun to come, you won't regret it!