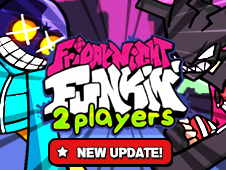 What is FNF 2 Player?

On 03.08.2021 there was an update to the FNF 2 Player Mod version in which we brought new functionalities that the players requested.

Among the most important features we have developed are the addition of new characters and new songs that you can fight. In the new version of the game, you will be able to play with the following characters: Boyfriend, Pico, Girlfriend, Tankman, Garcello, Daddy Dearest, Skid and Pump, Mommy Mearest, Monster, Shaggy, Whitty, Agoti, Ruv.

You can choose the following difficult levels:

We are happy to announce that we have published one of the most requested mods of the famous Friday Night Funkin game in which you will have the opportunity to play with your friends from the same computer so that you can see which of you is better at this game. For beginners, you should know that this mod can also be played in single-player, and in this chapter you will have the opportunity to try the first four weeks:

In the Multiplayer version - FNF 2 player, you will be able to choose more characters so that you can be who you want. You will be able to choose which character wants to be even your opponent, after which you will have to select the level of difficulty you want to play, and in this chapter you will have the opportunity to choose between 5 different levels of difficulty, increasing: Easy, Medium, Hard, Insane,?!?!?! #!?. The songs in the game will be offered randomly, but we are working on an update of the game in which you can select which song you want.

The fun is on another level in FNF 2 player mode

The two-player mode is much more fun because you will be able to challenge your friends, schoolmates, or even the people you can't stand, to a rhythm dance match with Boyfriend, Daddy Dearest, Spooky, Month, Pico, Mommy Must Murder, Girlfriend, Tankman in which you can prove to them that you are better than them in this game. As you can see, each battle you give on the dance floor will be noted, and at the end, in the upper left, you will be able to see which of you has a better score (player 1 or player 2). At the same time, you will need to know that you have the opportunity to change the character you initially chose so that you can see which one suits you best.

Player 1: use the arrows to dance;

For mobile, use the arrows shown under each player.