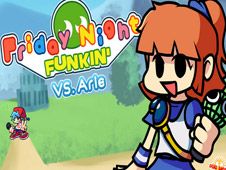 What is FNF vs Arle (Puyo Puyo X FNF Mod)?

FNF and Puyo Puyo Games together is now a reality, as this is yet another classic series of video games with which Friday Night Funkin' has crossed over right now, and we are delighted that we can share this amazing mod with you since it features tons of fun characters from it to battle, as well as many amazing songs for it:

Whether you are playing in the story mode or free play mode, the way towards winning remains the same, which is by reaching the end of the songs by playing all your notes according to the charts. From the main menu, you pick between the two modes, as well as a difficulty level.

When arrow symbols are matching above your character's head, press the identical arrow keys at the same time, and keep at it until you reach the conclusion, but know that if you miss hitting those notes multiple times in a row, you have to start again. Good luck, enjoy!