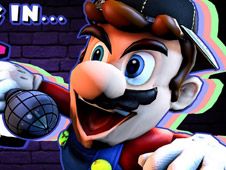 What is FNF SMG4 – If Mario Was In FNF Mod Pack?

Of course, our team is excited to bring you even more new FNF Games online to play for free today on our website, something that we give you the opportunity to do right now and here with the awesome game called FNF SMG4 – If Mario Was In FNF Mod Pack, which features Mario, one of the world's most popular video game characters!

Learn all about this FNF Mario mod right here!

Mario is a playable character in this game, and he is an Italian plumber with blue overalls over a red shirt who also has a red hat, who you know that is featured in his Mario Games, where he is always on a mission to save Princess Peach. The other playable character is Tari, a girl with blue hair and the main character from Met Runner, and a hit with fans of FNF as well. Also, you've got the Bonus Week where you can play against Whitty!

How do you play FNF Games?

Well, it's quite simple. You use the arrow keys, pressing them when the same arrows above your character match one another, and when they do so, and you hit the notes of the song, you need to continue doing so all the way to its end, but don't miss too many notes in a row, or you lose the rhythm battle. Good luck!