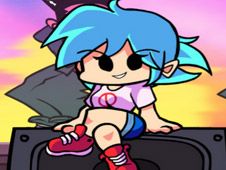 Right now you are about to play one of the best and most unique FNF mods online for free we've had on our website so far, a game we definitely recommend to you, which is called FNF Gender Swap Mod Pack, where each and every one of our staff members has had lots of fun, so there's no doubt in our minds you will love it as well!

What? Boyfriend is a girl, and Girlfriend is a boy? Learn more about it!

As the title suggests, instead of having new characters brought to the mod, we've got all the classic ones you like, but those that are boys have turned into girls, and those that were girls, are now boys. That is why Girlfriend is dressed up and looks just like Boyfriend, only feminine, and Boyfriend is a red-haired boy who resembles the original GF.

The antagonists remain the same, such as Daddy Dearest, Mummy Must Murder, Skid and Pump, Pico, and Senpai, together with their many funkin' original songs! Of course, these characters swap genders as well!

Learn the gameplay of FNF Games here, if you're new to this series!

Against the aftermentioned antagonists, you have to win in a rhythm battle, where you will use the arrow keys to do so. Press them at the same time as they are matching above your character's head, to get the timing right, but know that missing to hit too many notes in a row means losing the game, something you should not let happen for anything in the world!

Good luck, and we really hope to see you here some more, and that you will also share this game with all your friends!