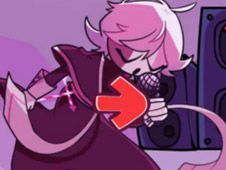 The FNF Mid-Fight Masses mod returns with the Gender Inversion, where male characters have become female and vice-versa, a really cool premise that will give the game some new life into it, and we're sure that even if you did not play the original before, you are still about to have quite a lot of fun!

Whether you're playing in the story mode or free play mode, winning is achieved in the same way, by reaching the end of the songs, something you are doing by playing notes according to the charts until then, doing so by pressing the arrow keys at the same time as the identical arrow symbols match on the top right.

If instead, you miss too many notes in a row and your health bar depletes, you lose and need to start again from scratch. Good luck and the best we wish you all, as always!