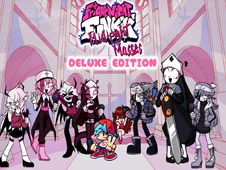 It's with lots of joy that right now we get to offer you a brand new version of the FNF Mid-Fight Masses mod, certainly one of the most popular ones in the franchise, and this is a deluxe version of the original where tons of new songs are being added on top of the previous, with remade graphics, backgrounds, and animation, so that you can have a fantastic fresh time. The songs are the following:

Enjoy lots of songs with the demon nuns!

Whether you battle these characters on their songs in the story mode or free play mode, the way to win is the same, and it is by reaching the end of the songs, which can only happen if you play all their notes correctly, according to the charts.

To do this, watch for when arrow symbols above BF match one another, and press the identical arrow key from the keyboard, but missing that moment multiple times in a row leads to losing, so be careful not to let it happen. Enjoy!