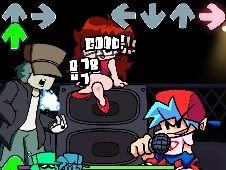 What is Friday Night Funkin VS Garcello?

The new FNF vs Garcello mode is interesting and attractive for all Friday Night Funkin series fans. This time we will have a controversial character against whom you will have to fight on four new songs.

Who is Garcello from FNF?

Smoke 'Em Out Struggle is the new character of the famous game in which you have to dance on rhythms, and he has the appearance of a bad boy, being a smoker, with a hat on his head and a neighborhood outfit. Garcello has a cigarette in his mouth, a brown cap on his head, a black sweatshirt, and his pants are dark green. He has sudden movements in the game and manages to dance very well, which is why we guide you to start with the easy mode at the beginning until you get used to the new songs in the game.

What songs are in the new mode?

Although we have only one week, vs G, in the game you will meet 4 new songs: Headache, Nerves, Release, Fading. Each song is composed at an increasingly fast pace.

Use the arrows to dance as well as you can against Garcello.