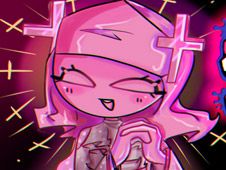 What is FNF vs Minus Sarvente (Mid-Fight Masses)?

It is still the case that Mid-Fight Masses is one of the most popular FNF mods online on the internet, so we are very happy whenever new versions of it appear on the internet, just like it is happening at this moment when we invite you all to check out the game called FNF vs Minus Sarvente (Mid-Fight Masses), where you go up against this demon nun once more, but this time in her Minus form, meaning that she looks just like her icon.

Use your holy music skills to defeat Minus Sarvente!

After picking between the story mode or free play mode, whenever you've got a song, you got to reach the end of it by playing all of its notes along the way, completing its chart.

To do so, when arrow symbols above BF match with one another, you need to press the same arrow keys, but be careful not to miss doing it too many times in a row, or you lose the game. Enjoy!