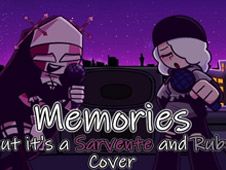 What is FNF: Sarvente and Ruby Sings Memories?

Sarvente and Ruby are both quite popular in the world of Friday Night Funkin' Games online on our website, but never before have the two of them faced each other, which is why we are delighted to bring you a game where they finally are, as right now you are all invited to have tons of fun with FNF: Sarvente and Ruby Sings Memories!

Help Sarvente and Ruby rock the tune of Memories!

When you see arrow symbols match above your character's head, make sure that you immediately press the same arrow keys yourself, and keep doing it until the end of the song to become the winner, since that is when the progress bar will have moved fully towards you for playing the song according to its chart.

Be quite careful not to miss pressing those keys too many times in a row, because if that happens, you lose and have to start all over again from scratch. Enjoy, and stick around for even more fun to come!