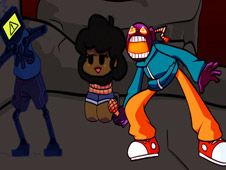 What is FNF: Hex and Whitty Sings EXPURGATION?

Hex and Whitty are two popular FNF mod characters that have never fought against one another before, which is why we are delighted that this can happen right now and here when our administrative team invites you to check out the FNF: Hex and Whitty Sings EXPURGATION, which also features this hellish song that is one of the hottest ones in the franchise!

Hex VS Whitty, the musical battle of the day!

When you see that arrow symbols above Whitty's head match one another, it is at that moment you will have to press the same arrow keys yourself, and have to keep doing it until the end of the song in order to win.

This also means that you should be careful not to press the keys wrong because if you do it too many times in a row, you lose the whole game and have to start it again.

Enjoy, and stick around for as long as possible, since you never know when brand new games with FNF will appear out here for you!