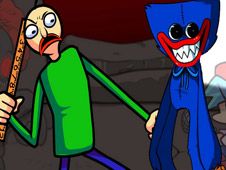 Two internet sensations are going at it in FNF right now, and they are Baldi and Huggy Wuggy, who will now have a rap battle against one another on the song called 'Expurgation', which comes from Tricky's mod, who is also from Madness Combat, so we've got quite the crossover here for you all!

To win the battle you need to reach the end of the song, and to do that you need to press arrow keys at the same time as the identical arrow symbols match above your character. Keep at it until the conclusion, but know that if you miss hitting multiple notes in a row, you lose and have to start again from scratch. Enjoy!