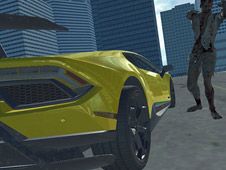 What is Supercars Zombie Driving 2?

Cars and zombies might be an unusual combination, but every time it appears in either the racing games or the zombie games categories, it always makes quite the ruckus and it is very well received by the players trying out these games, and we hope that you will be one of those trying out Supercars Zombie Driving 2 right now, and we've got no doubt at all you won't be disappointed about it in the least!

Let's run over some zombies, shall we?

You start off with a limited amount of sports cars and muscle cars you can drive, but then along the way you will be able to unlock more of them, worry not. As for the way you drive them, simply use the arrow keys.

Go out in the zombie-infested cities and use the car at your disposal to run into the zombies, run them over, and kill them, having to kill 100 zombies each time to pass that stage and unlock a new car.

They're just moving around, slowly, so kill them, but try being careful too, since you don't want to wreck your car too much either. Let the excitement start right now, and have a different kind of zombie apocalypse!