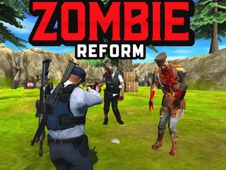 What is Zombie Reform?

Are you ready to create a Zombie Reform by shooting them all down, because when there are no longer zombies to eat humans alive, there will truly be a change in the world? We hope you are, because this is one of the best zombies shooting games online 3d we've had here recently, and you know this genre never misses, so don't miss shooting as well!

It's time for a Zombie Reform, not with politics, but with guns!

You will have a total of six maps to complete, and to do so you have to complete twelve levels first, 12 per map, which only happens if you also take down the big boss in the final round. Each new level, as well as a map, is more difficult than the one before, with the zombies being stronger, but you should become more powerful as well.

As you earn money from defeating zombies, you can use them to buy new characters, skins, outfits, but, most importantly, new and better weapons to shoot them down with. Use WASD to move, mouse to aim and shoot, U for the bazooka, R to reload, C to crouch, 1, 2, 3 to change weapons.

The reform is that simple, so shoot to not get eaten, and keep having fun as it is possible only on our website, where you never run out of it!