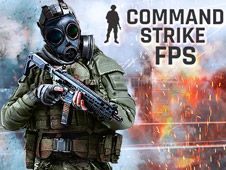 What is Command Strike FPS?

Command Strike FPS is a brand new first-person shooter game online in 3D and multiplayer-ready, meaning that you can go and challenge your shooting skills against other boys and men from all over the world, with the world, designs, and mechanics being inspired by Counter-Strike Games, but also Battlefield, Call of Duty, and more!

If you want to play by yourself against the computer, try the Missions mode, featuring three different maps:

Use the money (represented by gold bars) that you win in the game for the Arsenal, where you can buy yourself new weapons, as well as protective gear.

We highly recommend playing more in the Multiplayer mode, which is what most of the people here try out, and you can play it in three formats as well:

Move with WASD, use the mouse to aim and shoot guns, G for throwing grenades, H for the first-aid kit, C to squat, the spacebar to jump, and change the weapons with the scroll wheel.

Good luck to all you virtual soldiers, have the best time possible and stick around to see what many other amazing games for boys are still on their way for you here right now!