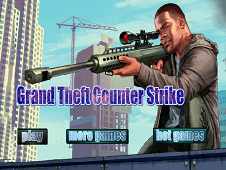 What is Grand Theft Counter Strike?

Grand Theft Counter Strike is one of the games that are sure you will love it almost as it is one of the hottest games Counter Strike in which the action is at home. Grand Theft Counter Strike is a very nice, a full-fledged shooter in which you must choose which side of the war are, by the police or the terrorists. Depending on this, and after you have chosen, you will start the war. You will receive a certain weapon, depending on which side you want to be because the police receive a certain weapon and another gun terrorists. After you have a gun, the real game begins. You have to shoot all the enemies you see them, of course, but to distinguish between teammates and opponents. This game is on rounds, so it must have a certain time to kill them all and to drive your team to victory. You must do this as soon as possible, and if the police and terrorists planted the bomb, you must run quickly in that direction to disarm. Focus and kill as many people.