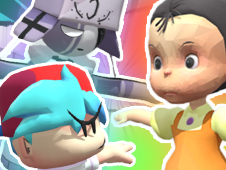 Probably the most anticipated game of the year for Friday Night Funkin' and Squid Game fans, it is now online on Play-Games.com, and we advise you to try the new online game as soon as possible because we are sure you will like it considering that the action of the game involves the most famous 20 characters from FNF.

The characters from FNF in the movie Squad Game

As you can see, the most important characters from FNF appeared in the game Red Light Green Light inspired by the movie Squid Game, and you will be able to choose any of the following: Boyfriend, Girlfriend, Whitty, Tankman, Sonic.exe, Garcello, Mom, Daddy Darest, Pico, Monster, and so on. After choosing which character you want to start this mission with, you will have to start the game and try to get to the green line as soon as possible, before the other characters who are in the same race as you.

In order not to be shot by the guards who defend the robot doll (The Doll), you will have to move as carefully as possible, only when the doll is turned with its back to you and the green LED is on. If you make a single move when the red LED is closed and the doll is looking at you, you will have to assume that you may be shot by the guards defending the doll. In the game, you will be able to buy all kinds of items depending on how many bonus points you manage to accumulate, which is why we guide you to be very careful in the way you manage your budget.

In total, the game has 10 different levels, the first being the easiest, after which the following ones have a higher degree of difficulty. You will be able to enter the shop only after you have at least $ 100.

use the mouse to move.