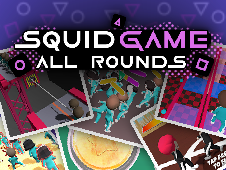 What is Squid Game: All Rounds?

Certainly, many fans of Squid Game have been waiting for this game in which you will have the opportunity to go through all 7 rounds of this famous game. The game is a progressive one, so you will have to start with the first easier levels, after which you will be able to move on to the most difficult missions.

What do you have to do in these 7 rounds of the game?

Did you manage to pass all 7 rounds? Leave us a comment to tell us what do you think about this game developed by the Play-Games.com team.

Please read the instructions from each round.