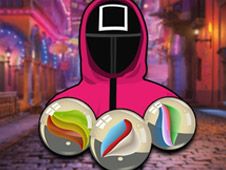 What is Squid Game Marble?

The original Marble Game that was featured in this Netflix show could not have been recreated like that, because each team that competed in it chose their own way of earning the marbles, but that also means the developers of this game had all the freedom in the world to create an interesting Squid Game with marbles, and now you will take part in, with us hoping you win and have tons of fun!

Win the marble game, stay alive, and get money from the squid!

The game sort of works like a combination of golf and 8-pool, but instead of normal balls used in these games, you will have a marble, and you have to get that marble to enter the hole on each playing table.

Use the mouse to tap and hold on to it, and then aim towards where you want to shoot it, draw it back as much power as you need, and then release it to make the shot.

If it gets inside the hole while avoiding obstacles, you advance to the next level, where you do the same, but a bit more difficult, or, otherwise, you get shot and have to start the game again from scratch. Enjoy, good luck!