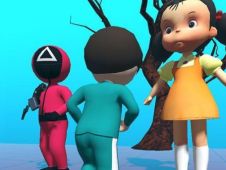 The first online game inspired by Squid Game is now available to all Play-Games.com players. In this game, you will have to get acquainted for the first time with the whole story created by Netflix studios, a series that appeared on September 17, 2021, including the main character of the game - Robot Doll.

The first version of Squid Game online - free to play

The action of the game is quite simple, your entire activity will be based on how well you manage to coordinate your movements on a wide field so that you are not found moving by armed people who are watching you. As you can see, you are surrounded by several people dressed in a green suit, just like yours, people running towards the robot doll. The robot doll is defended by several soldiers armed with machine guns, who will shoot at the people who take steps when the red light comes on.

The whole action of the game will unfold in this way: you will have to go to the doll only when you see that the green light is on. When this light bulb changes from green to red you will have to stop instantly; if you fail to stop running you will be shot by people watching you from the edge of the battlefield. When the light bulb changes from green to red, the entire platform you step on will turn red. Another important aspect is the fact that above the tree where you have to go is a clock that works counterclockwise, informing you many seconds you have until you can reach the robot face. If this time has elapsed you will not be able to continue the game.

In the upper right, you can see how much money you have earned throughout the game. The whole activity takes place in a wheat field, from where you can not escape through the sides unless you manage to reach the robot face which is in front of you.