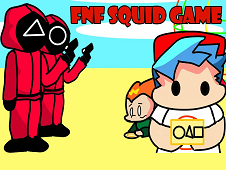 What is FNF: Squid Game?

Surely you all know the famous Squid game series, in this sense the Play-Games.com team has developed an online game with Squid Game that can be played for free by all fans of the series on Netflix. Well, as you might expect, the developers of the famous Friday Night Funkin game have released away inspired by this series in which you will have to meet the armed soldiers dressed in red suits, who carry machine guns and pistols.

Even if we are only talking about one week, one song, the game is quite interesting, and the level of difficulty is quite medium, created for all FNF players. SQUID series fans will definitely try this mode as well, which is why this mode is quite easy for everyone who wants to play it.

Boyfriend's mission is quite simple: from the moment the music starts, he will have to dance so well that he will win the battle before the robot doll returns. The song is inspired by the famous song "Red Light Green Light". If BF does not have to win this duel, all the money will be returned, and BF risks losing his life, being shot.

Why aren't you playing?

A rap battle? kid, I don't have time for thi.