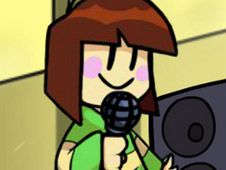 What is FNF: V.S Chara: Game Over?

Chara is a returning character in our category of FNF Games online, and the reason for that is because he is a fan favorite, and every new mod we had of him had not only a new character design for him but also new songs for you to enjoy, just like it will be the case right now and here with this FNF Chara Game Over mod, where you battle him on the following custom songs:

Boyfriend Vs Chara, Game Over, or just the beginning?

Whether you try this game in the story mode or the free play mode, you've got the same goal of reaching the end of the songs, playing all their notes according to the charts, and winning once that is done!

To achieve this, press arrow keys at the same time as arrow symbols above BF match one another, but know that if you miss doing that too many times in a row, you lose the whole game and have to start it again from scratch. Good luck, and tons of fun we wish you all!