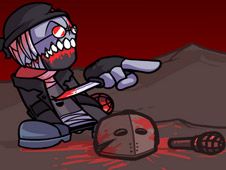 What is FNF: Hank Over Tricky?

Hank is an assassin and powerful ninja coming over from the Combat Madness series, one with which the Friday Night Funkin Games category has crossed over before, but this time you get to play the game called FNF: Hank Over Tricky, where Hank becomes an antagonist, as the last time he replaced BF as the protagonist.

Tricky is the character he is replacing, so the custom songs from that week return:

Like in all the other mods, choose between the Story Mode and Free Play mode, and then give it your best to reach the end of the songs with the progress bar in your favor, since that is how you become the winner.

Of course, to reach that point you need to play the notes of the songs very well, so use the arrow keys to do that, pressing them at the same time as arrow symbols above BF match with one another.

Be careful not to press them too early or too late, because if that happens you lose and have to start all over again. Good luck, and enjoy!