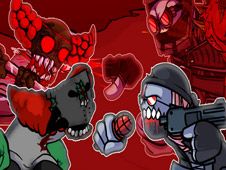 What is FNF: Madness Ultimate (Hank vs Tricky)?

FNF: Madness Ultimate (Hank vs Tricky) is the FNF Madness Combat mod you were waiting for, definitely since it features the musical battle, not a gun battle, of Hank and Tricky, the focus of this series, with this mod combining a lot of things, and the track is FIRE!

Watch for the moments when arrow symbols float and match above Hank, and press the identical arrow keys at the same time to hit your notes, and if you keep doing it until the song's end, you win. Don't miss hitting the notes too many times in a row, or you end up losing and having to start again from scratch. Good luck, we wish you the best!