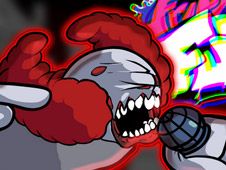 What is FNF: Madness Combat 9.5 vs Tricky?

It is once again time for you to play FNF Games with Madness Combat on our website, just like we are inviting you each to do right now and here with the awesome game called FNF: Madness Combat 9.5 vs Tricky, where Tricky has turned into a zombie, a zombie for you to beat on the following three original songs:

Face the musical horrors of Tricky the Mad Clown once again!

It will be your choice whether you play this game in the story mode or free play mode, and either way, your goal remains identical, which is to reach the end of the song playing the notes according to the charts, so when you see arrows matching above BF's head, press the same arrow keys yourself.

Be careful not to miss pressing the keys too many times in a row, or you lose the whole game and have to start it from scratch. Good luck, and make sure that this is far from the final new game you play on our website today!