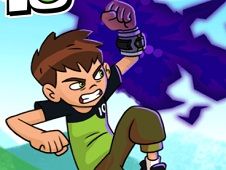 What is Ben 10 Omnitrix Shadow?

Ben 10 Omnitrix Shadow is our latest adventure from Cartoon Network that you dear kids can play for free starting from today here on our website, and you can go and fight against big and powerfull robots.

This is a very special Cartoon Network challenge, in which you will have to make sure that in the shortest time, you can defeat the robots and release the Omnitrix Shadow off Ben 10. At the beginning of the game, you can see that Ben 10 has encountered a wizzard which cast a spell on Ben 10's omnitrix, and how the shadow of the wizzard is whereve Ben 10 is, and you are the only ones that can help Ben 10 to defeat the robots and become a normal superhero again.

Inside this new adventure, you dear friends can see that Ben 10 will pick his favorite alien superhero from his Omnitrix, and you will have to work hard and fight like a professional in order to survive each and every one of the levels. You can see that your robot enemies will come in waves, and you and Ben 10 will know that you have reached the end of the adventure inside a level when you find the Omnitrix shining box that will give you extra points. Untill you get to the Omnitrix box, you will have to fight against the robots and for that you will have to use the X button on your keyboard.

As any character inside a fighting and adventure game, Ben 10 will have a life bar as like the robots, so you have to keep your life bar as full as possible in order for your favorite Cartoon Network superhero to reach the end of each level that you take part of. We know that it's not going to be easy at all, but if you stay close to the robots and give the first punches, you will enter the combo mode, so Ben 10's hits will be stronger and you will win each fight without having not even a scratch.

Look for other Ben 10 adventures and many other boys games with new Cartoon Network characters here on our website. Have fun!

Use the ARROW keys and X button to play.