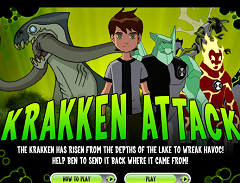 What is Ben 10 Kraken Attack?

Ben 10 Kraken Attack is our new super game in which you'll have to fight a lot and make sure you don't lose to these alien forces that only want to take control over the earth. All you have to do is to become hearbeat and distroy that monster of a kraken. First of all be sure you know all the comands you have to use. All you need is the up arrow key to change the directions in which you will spin, and also the spacebar to shoot at that monstruosity. Make sure you don't get hit really bad from that monster because it all depends on you and the moves you make to become the hero the world needs. Shoot the monster until all of his life is over. You can look in the down side of the game to see his life. Shoot him and don't let him shoot you. Be careful because his bullets are also really strong and he could kill you really fast if you would not be as very carefully. We hope you enjoyed our super games and everytime you play this as well. Be the best in this thing and win all the games.

Use the up arrow key to move and the spacebar

Which Avenger Are You
ADVERTISMENT