Which Bear Bro Are You? 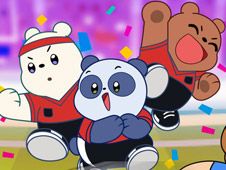 Toon Cup 2022 is finally here, free of charge and unblocked for you to play all across the world, as we're talking about a classic Cartoon Network game that receives a new updated year after year, and this year's version is finally here, reuniting all the characters you love from the current programming!

Start off by choosing the national team you want to represent out of any continent in the world. You will then comprise your team out of a captain and two players, and you can choose characters from all the following shows:

After making your team, lead them to victory in the Tournament or the Toon Leagues by winning matches, which is done by scoring more goals than the other team in the allotted time for the game. Use the WASD keys to move, and the spacebar for shooting, passing, and tackling.

Good luck and the best we wish you all, after which we hope that you tell your friends the game has finally dropped, and invite them to enjoy it as well!

Use the WASD keys and the spacebar.