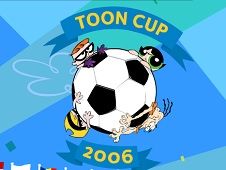 What is Toon Cup?

Toon Cup is one of the best football games, added on our site just for you sports enthusiasts that want to have some of the best games, only on our website play-games.com. In this game you will meet with leading artists and the best characters from the Cartoon Network, which were thought to organize a football match between them, so players still have a lot of fun and amusement. In this game, the World Cup is held Cartoon Network's where the biggest stars come together to play football really. Football game will be played in Brazil. In this game you can choose which team you want to be, and the three players who will be the football team that consisted of cartoon characters. After you have chosen the team and players will begin the game of football itself. In it you have to give all your best to score as many goals and do everything possible not to take too much or you can even none, to win the match. At the beginning of the game you can choose if you want to play a Quick Game or want to start a tournament where the best players will participate.

Use the arrow keys, z for passing and x for shoot.