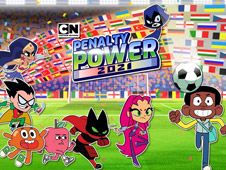 Cartoon Network football games online never disappoint, and we really love it that we get to find more formats like that in addition to the classic Toon Cup Games online you already love, and that is the case right now and here, when our administrative team is delighted to share with everyone the game called Penalty Power 2021!

How many goals can you score from penalty kicking with your favorite Cartoon Network characters?

You begin by creating your team, which will be comprised out of two characters, one that assumes the role of captain, and the other one that assumes the role of goalkeeper. You can pick from characters that belong in the following shows: DC Superhero Girls, Gumball, Apple and Onion, Mao Mao, We Bare Bears, Teen Titans Go, as well as Craig of the Creek.

You are then going to play football and try to win matches in various countries around Europe, such as Germany, UK, Italy, Russia, Turkey, and many others. If you're shooting, use the mouse to swipe in the direction you want to kick the ball, and if you're defending, use it to jump and catch the balls sent towards you.

Before the time goes out, try to score as many goals as possible, defend as many of those coming towards you, and the team that has more goals scored than the other at the end of the match becomes the winner. Good luck!