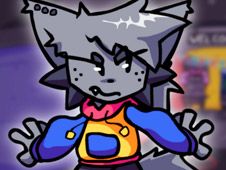 What is Friday Night Funkin VS. KAPI v2?

FNF's Kapi returns in full force with a V2 full-week mod right now and here, where the entirety of our team is sure you are going to have simply a blast from start to finish, as this character is quite beloved, having appeared in other mods too, and even more so when you now sing and dance on even more songs:

Choose between the story mode and free play mode, and, in either case, give your best to reach the end of the songs, which is when you win, so to do that hit your notes according to the charts until that point. Do it by pressing arrow keys at the same time as the identical arrow symbols match above BF. Don't miss hitting them too many times in a row, or you lose. Good luck!