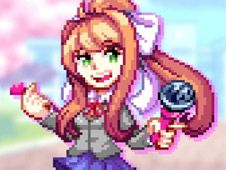 What is Friday Night Funkin vs Monika (DDLC)?

Having more anime girls in our category of FNF Games online is always a great idea, which is why we really could not have stayed away from sharing with everyone here a new and awesome game such as Friday Night Funkin vs Monika (DDLC), featuring this new character and her be songs, all about which you will learn more right now, so you can start having fun right away!

Who is Monika from FNF?

Well, first of all, she is not originally from FNF, because her origin is in the Doki Doki Literature Club, a video game with anime girls that lots of people love, and she has orange hair in a ponytail, with a bow, she wears a school uniform with some leggings, and some pink shoes. Her custom song is called High School Conflict, and it is inspired by the storyline of her game!

Help Boyfriend defeat her in a rhythm battle, taking the song to the end without messing it up to win! When the arrows floating around Boyfriend match with those above his head, at that same moment you will press the same arrow on your keyboard to hit the note, but if you miss the notes too many times in a row, you lose and have to start again from scratch! Good luck!