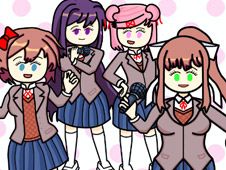 What is FNF X DDLC?

Monika, an anime girl from Doki Doki Literature Club has previously been featured in our category of FNF Games, and her mod is one of the best, but today we are glad that some of her other anime friends from the same series are here with us, with you and Boyfriend having the chance to go up against them in a musical battle of rhythm!

There are four cute girls to battle, and there is one song for each:

Boyfriend Vs The Doki Doki Literature Club, who wins?

When you see the arrow symbols above BF being matched with one another, press the arrow keys at that same time to hit the notes of the songs according to their charts, but, be careful not to press them too early or too late, or you lose.

Your goal is to play the notes of the songs so well, going on until the end of the song, and if you do it correctly, the progress bar will have turned towards you, and you've won, simple as that! Good luck!