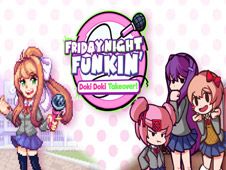 All of the previous crossovers we have had between FNF Games and Doki Doki Literature Club have been very well received by our audience, as it seems these anime girls are really popular, and now you can have tons of fun with multiple of them, because in addition to Monika, other of her friends have joined, each with their own week and songs, as follows:

The Doki Doki girls are taking over, so take them up on their challenge!

Whether you play the game in the story mode or free play mode, your goal remains the same, and it is to reach the end of the songs by playing all their notes according to the charts, something for which you use arrow keys.

How? Well, you watch for when arrow symbols above BF are matching, and then press the very same key from your keyboard, without missing to do it too many times in a row, since that leads to you losing. Enjoy!