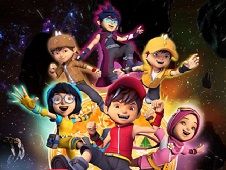 What is Boboiboy Galaxy Run?

In the Boboiboy Games category that you all know and love we now give you one of the best action-adventure games with elements of running and jumping games, which is called Boboiboy Galaxy Run, where you go through different alien planets through the galaxy. You start out by being Boboiboy Fire, but new characters get unlocked as you proceed, such as Boboiboy Earth, Lightning, as well as Yaya and Ying. They all have their own specific powers.

Your avatar is going to run forward through the levels, and you have to click on the screen to make them jump. Jump in order to avoid falling between the platforms and into the pits, hitting any of the obstacles such as the spikes, or touching any of the robots and aliens you encounter. When you approach them, your character shoots their powers at them.

After an enemy is taken out, they leave lightning bolts behind, so make sure to run through them to have them collected, because they represent your score, and only with them you can unlock new characters in order to use their special abilities.

There are different things that you need to accomplish to finish a run, such as swiping down a certain number of times, making a given number of dashes, as well as how many enemies to defeat. If you reach these goals, you get extra lightning bolts as rewards.

The galaxy is big, and it awaits you to explore it, so start the fun, and keep going for as long as you can, and never stop saving the world!

Use the ARROW keys to play