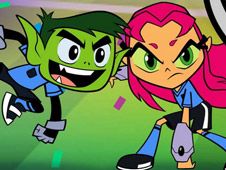 If all year long you were waiting for the Toon Cup 2021 to finally appear, well, there is no longer any need for waiting, as our administrative team is very excited that we can finally offer you all this brand new game, which had just been released today, and we immediately made sure that kids from all over the world would have the chance to play it, ASAP!

Play soccer with your favorite Cartoon Network characters, now with even more fun!

There are now two ways this game can be played in. The first one is the Tournament, where you try to win one match after another to reach the finals and win the cup, or the Toon Leagues, where you create your team and then play against all the other teams in the league, trying to get more victories and advance in the leaderboard, all the way to the top.

Choose the national team you want to represent, and then create your team out of three members, a captain, and two players, and you are able to select characters from the following shows on Cartoon Network:

Of course, just like with other soccer games online, what you have to do is score more goals against the opposing team before the time of the match runs out in order to win!

Use the arrow keys to move around, and press the spacebar to tackle, pass, and shoot. Good luck to all you football fans who will definitely try this game right now, and we definitely hope to see more of you here!