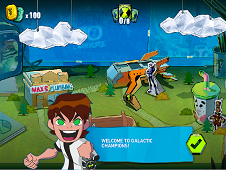 What is Galactic Champions?

Galactic Champions has always been one of the best Ben 10 Omniverse Games you can find and play here for free, where you get to explore the galaxy with Ben 10, go on adventures, have your own Omnitrix, and try to be the best at using it, as you will be competing with other aliens using the device.

Start off by choosing the device you want to have, with all sorts of colors being available. You are then going to pick your first alien, with some of the options being Insectoid, Nosedeenian, or Splixson. As you go on, you will get to unlock more new aliens in your device and have a bigger selection.

You are then going to start your first battle in the Quick Fight mode, while later on, you can take part in all sorts of alien battle tournaments. It is a turn-based battle mode, where you go in turns choosing if you want to attack, use a defense move, or use an item.

The main purpose that you will have is to deplete the opponent’s alien health bar first before they can do the same to you because you will then have won the alien fight! Strategize in such a way that you use your best techniques and are able to win one match after another.

Will you be a galactic champion in the world of aliens? Well, you will, if you try your best, so start right now, and have a great time with Ben 10, like you always do!

with the mouse you have to pick with Ben 10 attacks.