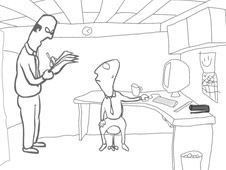 What is Whack Your Boss?

To Whack Your Boss might be something you imagine on a daily, but you should not do it in real life, that's not nice, which is why you should direct all that anger through a simple online game where you can hit him and get your revenge as much as you want to, with a funny meme game whose format has been around the internet for a while, and it's for good reason!

You see the simple scenario of a man in his office, at his desk, and a boss coming to bother him. With the mouse, you have to interact with the things around the scene, such as the computer screen, in order to find the seven ways and things you could use to whack the boss.

For example, you can throw the computer screen at him, or maybe attack him with a stapler. The fun of the game is finding all of the methods and seeing what kinds of funny scenarios happen, surely making you laugh. It's all that simple, so start right now, you won't regret it!