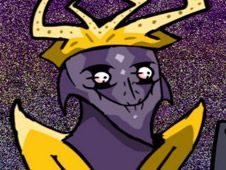 What is Friday Night Funkin vs Starecrown?

It's time for you to try out not only one of the newest FNF mods online on our website, but also one that has without a doubt one of the creepiest antagonists ever, in a game called Friday Night Funkin vs Starecrown, which you might find scary, you might find funny, but it will surely be entertaining!

Who is the creepy Starecrown from FNF?

Despite his looks, Starecrown is Boyfriend's biggest fan, so challenging him to a rhythm battle is a dream come true, so much so that when they first battle, he just sits in awe and stares at BF for over a minute before he hits his first note, and even that is a scream of joy that this is real. Of course, he hates that GF is that close to his idol, so we hope that you help BF take him out and remove this creepy person from his life!

The design of the character is really creepy, looking like a horror entity with yellow clothes and a pointy golden crown, has a really deep chin, and his eyes are bulging out of his sockets, especially when he is looking at BF. When singing, his eyes might pop out, his body deforms, and he might even become invisible.

How to defeat Starecrown in this musical battle:

Read this if you're new to the series! When the arrow symbols you see float on the screen match one another, press the exact same key on your keyboard at that moment, not any other moment, so that you hit the notes properly and win the song, without missing too many of them consecutively, or you lose. Good luck through the two songs you will battle in, called Phase 1 and Phase 2.

FNF vs Betty the Witch
ADVERTISMENT