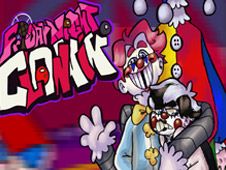 What is Friday Night Funkin Clownin?

We've had clowns before in our category of FNF Games online, but we think more of them is definitely a great idea, which is why our team is excited that right at this moment we can offer you this fresh and interesting new mod called Friday Night Funkin Clownin, where you're going to the circus to take part in rhythm battles like no others, and we're going to tell you more about it right now!

Meet the clowns who Boyfriend will fight against!

In this game, Boyfriend encountered a traveling circus band, and three clowns from it challenged him to rhythm battles, so now you have to help our protagonist defeat him. Perci is a clown who you play against in the song called B*tch, Lester has the song called Gentle, and the song for Maddox is called Germ.

When you see arrows match above BF's head, press the same ones on your keyboard, and if you do it at the same time, you hit the note of the song and advance, but remember that pressing wrong keys or pressing the correct ones at bad times counts as a miss, and too many misses in a row and you lose the battle because you've messed up the song too much.