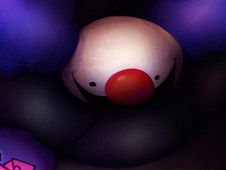 Twitter is a clown that represents the social media app with the same name where Boyfriend made a dumb post, which is why this bird clown is chasing after him and challenged him to a rap battle, a battle we hope you will win right now and here by playing this awesome new mod called Friday Night Clownin’/ Vs Twitter, where you have the following custom songs:

Use rhythm and music to defeat the Twitter mob!

Whether you are playing this game in either the story mode or free play mode, your goal remains the same, which is to reach the end of the songs by playing all their notes according to the charts.

To play notes, use the arrow keys, pressing them at the same time as arrow symbols above BF match with one another, but be careful not to miss pressing them too many times in a row, or you lose the whole game.

Good luck, we wish you the best, and hope that you stick around for even more fun to come!