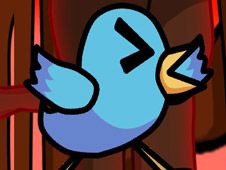 The icon of the social media platform known as Twitter is a bluebird, and this bluebird has now come to life, and you have to duel against it in a rhythm battle on our website, where we are positive that you and BF will give it your very best to defeat it on all the following songs:

Use music to defeat the one and only Twitter Bird!

You can face off against this bird in either the story mode or free play mode, that is your choice, and in both of them, you have the same goal, which is reaching the end of the songs by playing all their notes, since that is the only way to win.

To play notes, when you see arrow symbols above BF match one another, press the same arrow keys. If you miss doing that correctly too many times in a row, you lose because you've missed too many notes, so be careful not to do it. Good luck!