FNF Super Funky Idol But Everyone Sings It 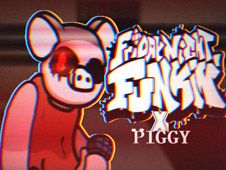 A pig known simply as Piggy has been infected by evil music and rhythm, and he is now challenging Boyfriend with one mic in his hand, and a baseball bat in another, so to get rid of this character, you will have to help our protagonist defeat him on the original song known as 'Bite', where we are sure you will have tons of fun!

Only through good rhythm and music can Piggy be defeated!

When you see that arrow symbols are matching above BF's head as the song continues on, you will have to press the arrow keys that are the same as the symbols, and if you keep at it without problems until the end of the song, you win.

Of course, this means that missing to press the keys multiple times in a row leads to you losing, so be careful not to allow that to happen for anything in the world! Good luck!