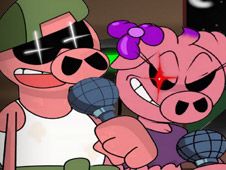 What is FNF x Piggy?

Only on our website do you have the chance to find and play such new amazing FNF Games online every day as you do here, which is what we are bent on proving to you all right at this moment when we are delighted to share with you the game called FNF x Piggy, where the characters from the original one have been replaced with characters from Piggy, a cartoon made by MiniToon.

Have rhythm battles with all your favorite Piggy characters, NOW!

You are going to be able to face off against these Piggy characters in either the story mode or the free play mode, usually having three custom songs per week, and your goal is to play the songs so well that you reach their end and turn the progress bar in your favor.

To do so, use the arrow keys, having to press them at the same time as arrow symbols above Boyfriend are matching with one another, but don't do it too fast or too late, since that is a miss, and if you make too many misses in a row, you lose.

Good luck to you all, and if you're up for more fun, you've come to the right place, so stick around, since more games with FNF are coming!