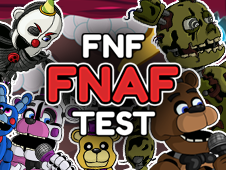 What is FNF FNAF Test?

Many fans of FNF TEST games have asked us in the comments for an FNAF mode in which they can test the most important characters from the horror story Five Nights at Freddy's, which is why the developers of Play-Games.com have created this FNF the way you will have the possibility to compose melodic lines with the scary creatures from the famous FNAF game.

Who are the characters from FNF FNAF TEST?

On the left side, where you find the characters' heads, you can change the character you want to test, and above this button, you will find the control buttons for the instruments: forward, pause/play, backward. Another interesting aspect is the special keys (1, 2, 3, 4) that you can press to create more interaction with these characters.

Use the arrows to test your favorite character from FNAF.

You can play this game from your mobile/ tablet as well.