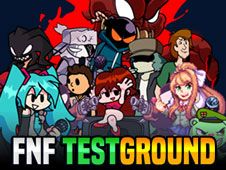 Given that many fans of Friday Night Funkin appreciate test games, we thought of creating a game called FNF TestGround in which you will have the opportunity to test the most important characters from the famous FNF game.

Who are the characters from FNF TestGround?

In case you think the game was to your liking, please help us with a share on the social platform you prefer, so that we make this game FNF Test, the most popular game in this category.

Use the arrows and the special keys which are presented in the game.