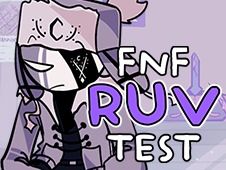 What is FNF RUV Test?

The new test game will embody RUV, Ruvyzvat for those who know him better, who is an unsuspecting murderer and is now the main character in this new FNF test mode. To create new songs and rhythms, you will be able to use the arrows that are on both sides of the game; on the left, you will have the arrow pointing up and left, and on the right, you will have the arrow pointing right and down. Depending on the order you choose when you click on these arrows you will be able to generate new songs.

Who is Ruv from Friday Night Funkin '?

This negative character became known through his friendships with Sarvente from Mid Fight Masses, but not much is known about him. The dance movement is always from the knees, and his physical appearance is quite athletic. The clothes he wears are of the same shade, gray-purple, wearing a cap on his head and having a covered eye. The jacket and boots he has, made us believe that his musical style is inspired by rock.