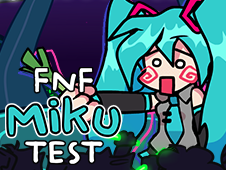 What is FNF Miku Test?

Since we know that you really like to test these characters from Friday Night Funkin, we thought we would give you the opportunity to test another very well-known character, named Miku, the main character from FNF vs Miku.

Who is Hatsune Miku from FNF?

This female character is one of the most popular female voices in Japan, being created based on crypto. Her physical appearance is quite good-looking, considering the fact that she has long turquoise hair, and her hairstyle is quite simple because she has only two ponytails on her head, but her hair reaches to her ankles. He wears a pair of headphones on his head just like any DJ.

To be able to test this character you will have to use the arrows to make the vocals of Miku that together with the instrumental will compose a song.

As you may know, we have some specials:

In the FNF Miku Test, you will be able to play different character versions including normal with microphone, normal without a microphone, and angry Micu. Pressing N you can change your appearance and the instrumental too, going from Popipo to Aishite and after that to Disappearance.

You can download the original Friday Night Funkin' + Hatsune Miku / FULL WEEK from GB, a mod created by Evidial and GenoX.

Use the arrows to make vocals, N for changing the version, M to mute the instrumental, and A, S, D for special moves.