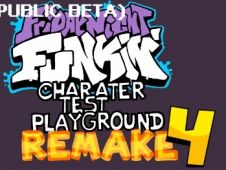 What is FNF Character Test Playground 4?

Test Playground Games of FNF have become slowly but surely some of the most popular games in this category, mainly because it features some of the most popular characters from the whole world of Friday Night Funkin', and you get to test out these characters all in one game, with this fourth version of the game having 10 new ones for you, including Sonic, Sonic.Exe, Ball, and more!

As is the case with these games, what you do is pick the character you want to use from the Char button, click on an icon, and then click back to return to singing and dancing.

You get to press the four arrow keys however you want to, with them making sounds and dance moves, different ones from one key to another, so freestyle the songs and dances however you see fit.

Let the musical fun begin right now, and make sure to stick around and keep playing all of the amazing games we've got in store for you!