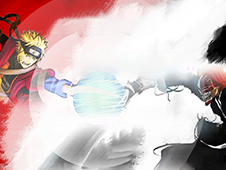 What is Naruto vs Bleach?

Naruto vs Bleach brings together fighters from two of the most popular Shonen Jump anime and manga series in the entire history of the genre, two series that have dominated the start of the 21st century, one featuring ninjas known as Shinobi, with Naruto being the title and main character, and the other one featuring death gods known as Shinigami, with Ichigo Kurosaki becoming one of them as a teen. Let's see which characters will win in this 2 player battle game!

Naruto vs Bleach: a two-player fighting anime game you should try right now for free!

If choosing the 2P mode, each of you picks a character from either of the two shows and then try beating the other one up until you deplete their health bar to win, which is also true for the Single Player mode, where you compete against fighters controlled by the CPU.

Here are your controls:

Now that you know how to control your fighters, you should start the one-on-one battles right now, and then further check out more anime games on our website, we've worked hard to bring you the best of them from across the internet!